A PAIR OF ARCHAIC BR 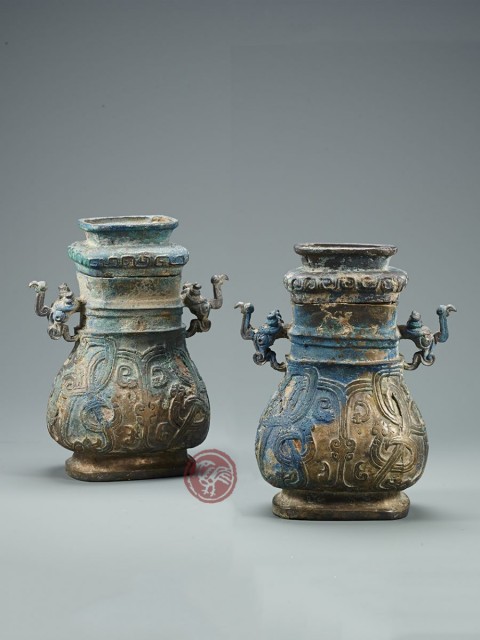 In pair with cover, robust body in round rectangular cross section with comparatively thick and heavy wall raising from a splayed foot, the lower body cast in high relief on the sides with intertwined dragons with various heads and slender snake-like bodies, below the neck with a pair of handles on two sides issuing from a dragon head with a bird head with sharp hooked beak cast on above; a band of S-shaped spirial motif cast in relief decorated on the sides of the cover, overall with original bronze patina on surface and some malachite and azurite encrustation.

Fang hu with handles cast in combination of an animal head with a bird head are extremely rare. Such design was commonly seen in Late Western Zhou to Early Eastern Zhou period. A bronze Fang hu in larger size with its handle cast with a dragon head issuing from an animal head was excavated in 1976 in Changan county of Shaanxi.