AN ARCHAIC BRONZE WINE VESSEL, YOU , WITH DRAGON PATTERN AND INSCRIPTION（BO YANG YOU） 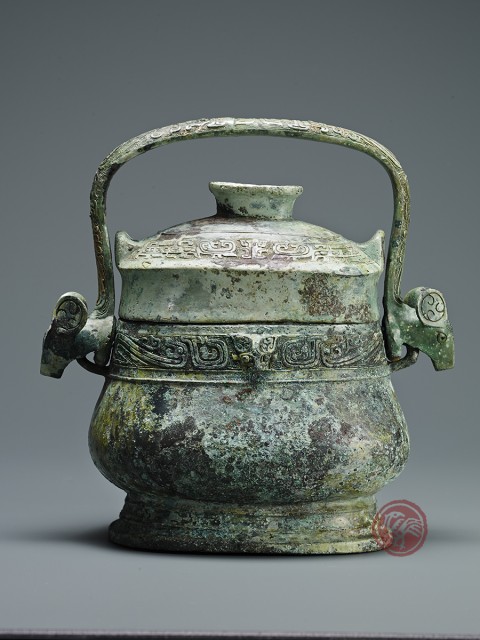 AN ARCHAIC BRONZE WINE VESSEL, YOU , WITH DRAGON PATTERN AND INSCRIPTION（BO YANG YOU）

The compressed pear-shaped body in elliptical cross section raising from a splayed pedestal foot, surmounted by a domed cover with a rounded rectangular grip on the top surrounded by a band of confronted kui -dragons, two horn raising from both ends of the major axis of the cover, the body flanked by a lateral swing handle fully decorated on its outer surface with a band of S-shaped dragons in relief, with each of its ends cast with a head of tapir, the neck of the body cast with a border comprising a beast head in high relief at centre of each side flanked by a pair of S-shaped dragons with backward-turned heads, all reserved on a neat spiral leiwen ground, in an overall mottled light green patina, the interior of the cover cast with a two-row inscription of ten characters that reads zuo zong bao zun yi wan nian sun zi yong , which literally means [it shall be] made as a ritual vessel for ancestral worship, [and it shall be] treasured by my sons and grandsons forever, the interior of the body cast with an inscription of five characters that reads Bo Yang zuo bao yi , meaning Boyang made this ritual vessel.