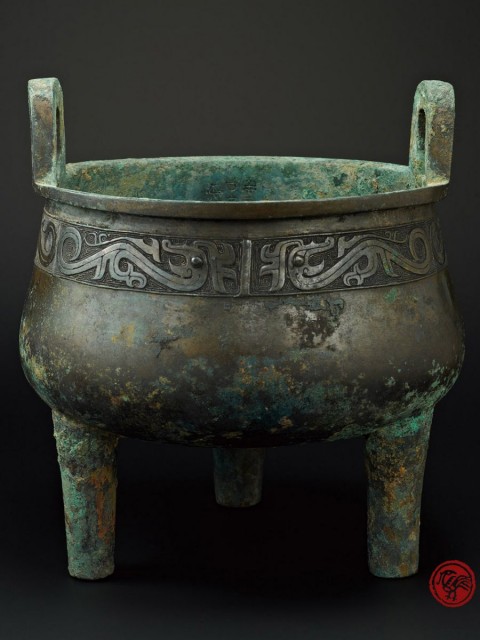 Formerly in the Collection of Private Japanese Collector, Sengoku Tadashi

Raised on three tapering columnar legs, the swelling thick-walled body finely cast on the neck beneath the mouth rim with a border of three equally divided simple short flanges of border-width in low relief, each flanked by a pair of confronted kui-dragons, with backward-turned heads, slender bodies, strong claws and coiling tails rested on a neat spiral leiwen background, all below a pair of bail handles rising from the everted rim, with an inscription of sixteen characters in three columns on the side of the interior, with an overall brownish black patina and patches of malachite encrustation

The sixteen-character inscription reads Nan Fang zhui xiao zuo Gong Zhong bao zun jiang yi zi zi sun yong bao, which literally
means Nan Fang made this previous bronze cauldron in honour and dedication to his father (or ancestor) Gong Zhong, sons
and grandsons should treasure it forever. It is the first time that the name Nan Fang appears on bronze inscription, and in this
case it serves as the name of a nobleman or a noble family who was active during the early phase of mid Western Zhou. Archaic bronzes from this family are scarce, another bronze gui dated to late Western Zhou, also with a sixteen-character inscription, had mentioned a nobleman named Nan Pang, probably comes from the same family, and is documented in Institute of Archaeology, Chinese Academy of Social Science (CASS) ed., Yin Zhou jin wen ji cheng (Collection of Bronze Inscriptions from the Shang & Zhou Dynasties), 1984-1994, vol.7, no.3845.