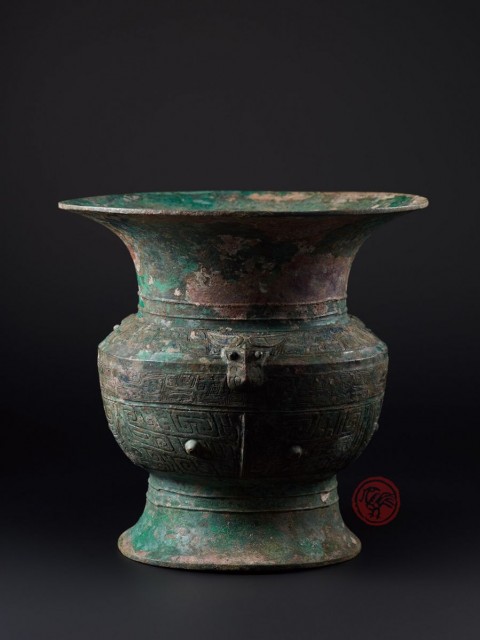 Of circular form with a broad trumpet-shaped mouth and a raised splayed foot, the central bulb cast with a band of three taotie masks with raised bosses as eyes symmetrically divided by a low flange below a band of stylized kui dragon scroll against a dense spiral leiwen ground, with a wider band of dragons with backward-turned heads, also on a leiwen ground, interrupted by three bovine masks cast in relief on the canted shoulder, all framed by two double bowstring bands on the neck and the upper part of the splayed foot, with an attractive dark green patina and large areas of cuprite and malachite encrustation

For this particular type of bronze zun with a broad trumpet mouth and canted shoulder, it can be dated specifically to the early phase of the Anyang period of the Shang dynasty. It was made as a wine container and was used for ritual purposes.For an archaeological sample with similar design, refer to a Bronze Zun with taotie mask pattern (Xinxiang 0218) found in 1954 from the excavation of a Shang dynasty tomb in Huixian, Henan, now kept in the Xinxiang Museum, as illustrated in Henan Research Institute of Cultural Relics ed., Henan chu tu Shang Zhou qing tong qi (The Unearthed Bronzes of Shang-Zhou Dynasty in Henan Province), 1981, vol.1, no.119, p.100. For a sample with nearly identical shape, pattern and design, now kept in the National Palace Museum in Taipei, see National Palace Museum ed., Shang Ritural Bronzes in the National Palace Museum Collection, 1998, No. 53, pp.328-333. Another nearly identical piece was once in the collection of Arthur M. Sackler, as illustrated in Robert W. Bagley, Shang Ritual Bronzes in the Arthur M. Sackler Collections, Washington DC, 1987, no. 45, p.280.