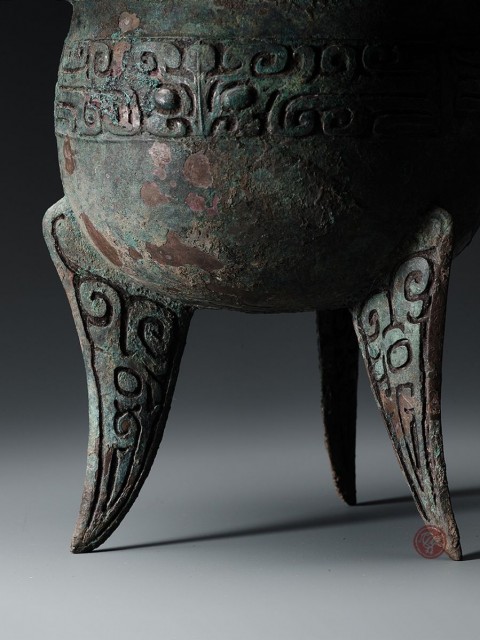 Collection of a private collector in Germany, 1950s

A deep rounded U-shaped bowl supported by three elegant outstretched blade feet that curved like wings of a bird, each broadly cast with an upright kui dragon pattern on both sides, the everted rim set with a pair of upright loop handles with one of them set right above the position of a blade foot, the upper part of exterior cast with a thick band of three primitive taotie masks, each designed in a symmetric pattern of a pair of confronted side-view dragons with raised oval-shaped eyes, overall in a green patina with slight areas of malachite encrustation

Bronze ding with blade feet is much fewer in number than those with conical or columnar feet during the Shang dynasty, but even among those with blade feet, it is extremely rare to have such wing-shaped curving lines in great harmony. Blade feet was first introduced to the casting of bronze tripod during the Erligang period of early Shang dynasty, and for such a particular type with deep belly, it is generally dated to the late Erligang period, i.e. the middle Shang dynasty. For archaeological samples of bronze tripod ding with blade feet, refer to a bronze ding (YM333: R2053) that was believed to be a remnant from the Erligang culture and was excavated from Tomb YM333 in Xiaotun, Anyang, Henan in the early twentieth century, the three blade feet are slightly shorter but with flanges and the taotie motifs on the body are framed by two bands of bead pattern, see Li Yongdi ed., Yinxu chu tu qi wu xuan cui (Gems of Yinxu: Catalogue of Selected Artifacts from Anyang in the Institute of History and Philology), 2009, no.2, p.5. For a classical bronze ding with blade feet from the Erligang culture, refer to one (PWZM1:3) excavated from Tomb M1 in Panlongcheng, Huangpi, Wuhan, Hubei, illustrated in Li Taoyuan et al., eds., Panlongcheng qing tong wen hua (Bronze Culture of Panlongcheng), 2002, p.117; also see another one with similar dragon motifs and blade feet with flanges in the Shanghai Museum, illustrated in Chen Peifen ed., Xia Shang Zhou qing tong qi yan jiu (Research on Bronzes of the Xia, Shang and Zhou Dynasties), 2004, Xia Shang vol.1, no.8, pp.20-21. Another bronze ding of this type with similar taotie motifs from the Erligang period is now kept in the National Palace Museum in Taipei, illustrated in National Palace Museum ed., Gugong Shang dai qing tong li qi tu lu (Shang Ritual Bronzes in the National Palace Museum Collection), 1998, no.19, pp.194-199.

PROVENANCE
Collection of a private collector in Germany, 1950s