A PAIR OF BRONZE WEI

A PAIR OF BRONZE WEIGHTS IN OPENWORK CHIMERAS DESIGN 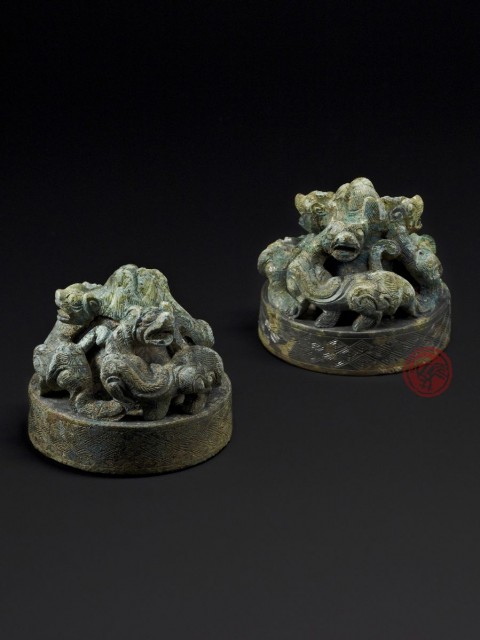 A PAIR OF BRONZE WEIGHTS IN OPENWORK CHIMERAS DESIGN

In pair, each powerfully modeled with three sculptural chimeras encircling a centre mountain peak, each beast with long sinuous bodies cast with wings on the shoulders and a long tail whipped under the haunches and along the flanks, the heads held high on tall arched necks, with large bulging eyes, blunt snouts and teeth bared in a threatening expression, the mountain ranges and the bodies of chimeras with finely incised details, the whole supported on a thick circular disc with concentric rhombus pattern on side, with a silvery-black patina with large areas of malachite encrustation

The use of bronze weights was first mentioned in ancient Chinese classics, Chu Ci, or Verses of the South, from the Warring States period, and they were used to serve as mat weights at corners, or paperweights for a scholar’s desk. In order to increase its weight, without enlarging its size, lead was significantly increased in alloy casting. Bronze weights of very similar design but a bit smaller in size were found in the excavation of Tomb 1, Wangniuling, Hepu, Guangxi in 1971, illustrated in Kaogu (Archaeology), 1972.5, p.26, pl.6:3. The pre-war Berlin State Museums, Staatliche Museen, and G. L. Winthrop of New York had also kept similar weights in their collections, see Umehara Sueji, O-Bei shucho Shina-kodo Seikwa (Selected Relics of Ancient Chinese Bronzes from Collections in Europe and America), 1933-1935, vol. 6 (part III, vol.1), pl.54.
Provenance
Collection of the Wang Family, Taipei, Taiwan