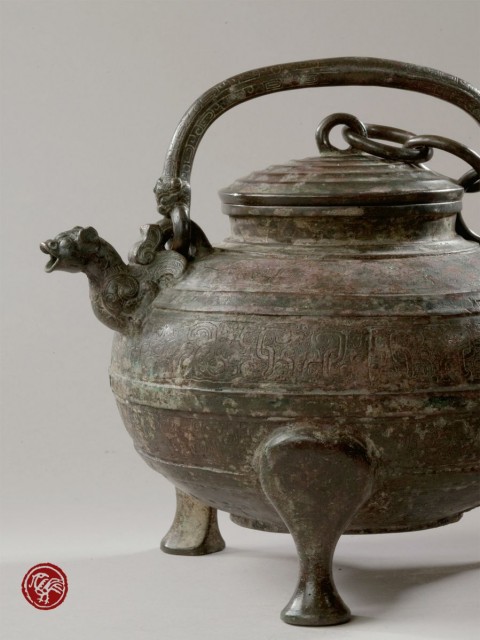 Collection of a Private Collector in Britain (1920s)

The compressed globular body supported on three cabriole legs, the sides encircled by three bands of flat cast interlocking angular dragons within raised borders with red copper inlaid, round opening on top with a short neck with inlaid inverted triangles on exterior, the domed lid with low raised concentric circles and a loop at centre attached to a set of three chain rings that link to a bail handle with cast scales and spirals, ending at both sides with an animal head and a loop, attached to the tail of the beast in front and an animal mask motif at the back, with dark brownish-green patina

He ewer is generally believed to have been used for heating and warming liquors. A similar piece in shape and design is Chun Cheng Hou He, now kept in the Shanghai Museum, illustrated in Chen Peifen ed., Xia Shang Zhou qing tong qi yan jiu (Research on Bronzes of the Xia, Shang and Zhou Dynasties), 2004, Eastern Zhou vol.2, no.628, pp.445-447.

PROVENANCE
1. Collection of a Private Collector in Britain (1920s)